By Lamplight is a turn-based dungeon crawler where you must climb to the 13th floor of the Demonic Spire.

As you climb, you must manage the oil supply for your lantern as well as your own health and sanity.  Lighting Torches can help stave off the grip of insanity but will cost you some of your ever-dwindling supply of oil.  Will you conserve oil to keep your lantern lit or will you save your sanity and attempt to ward off the horrors of the spire?

Space Bar to hold your position for a turn

Click on your lantern to ready a throw then click a tile to throw your lantern.  Be sure to pick it up after you throw it though!  You cannot attack without your lantern.0

By Lamplight is open source.

Feel free to check out our code and assets on our github repository!

Had trouble playing. This game assumes a very tall monitor—I couldn't see the health, oil, and sanity meters because they were off the bottom of the screen, and scrolling to find them is a pain. They could have been much smaller Also, the game is laid out on the page with itch.io's buttons on the upper-right overlapping, making it impossible to click anything under tham. In this case, scrolling was no help and I was just screwed. Only having left/right/up/down movement was frustrating. There's a good basic idea here, but it needs a lot more development.

Thank you for the feedback, another user expressed similar concerns which is why the fullscreen button is enabled despite not having great support for fullscreen play.

One suggestion I have is if you press control and scroll up or down (In Chrome, not sure about other browsers) you can zoom the window to make the game screen smaller so it can be played on your monitor.

Thank you for playing!  I really appreciate the feedback!

I am using Firefox on macos. I used Firefox's zoom command to make the game smaller and that showed everything, and made the overlay buttons not overlap the game any more so I could play without those hindrances.

I've done a couple runs now. It's pretty tough but I am figuring things out. It's very easy to run out of oil and have no way to restore sanity. I managed to get several levels in—past the one with 9 oil and 3 hearts. I didn't actually need the hearts but since there's no way to go back, I took them. I keep getting killed by the blue flames because they move in real time instead of on turns, and by the time I move my hand from the arrow keys to the trackpad it's too late. It seems I run out of both oil and sanity so that's moot anyhow, I've no resources to fight the blue flame.

I noted that the vampires just disappear on being struck. There is no animation or sound to indicate they've been killed. The ghosts do hiss when they die so that's good. I was surprised the ghosts don't go through walls. Kind of like the old arcade game Gauntlet. :-)

It took me a while to figure out that if I press space, the enemies will move to a square I can attack them in. I had the impression on early runs that I was getting attacked on diagonals but that turned out not to be true.

I decided early on that throwing the lamp to attack is a bad idea. In a comment below it looks like throwing the lantern can take out multiple enemies? I might try that on another run, if they are lined up, but so far I have been able to position myself so they just line up and come at me in a queue like polite British moviegoers.

"Weary" means tired! I think you mean to be "aware". (You may have been thinking of "wary", but that word is generally used for dangers, not resources.)

Ack!  Of course a typo like that gets through.  I'll have to fix it if I get the time to create an update.

I had quite a lot of initial trouble with the controls. At the start I thought the game was broken because it wouldn't respond to keyboard input — you need to click once before it accepts any, but clicking again selects you and disables the input.

I agree that light seems to run out too fast. You have a level that is just oil and hearts, and I was pretty much already out of oil again by the time I got to the next level. Maybe allow people to stockpile oil?

Like aishatrbi I kept finding myself cornered by enemies, who would never let me return to a thrown lamp. It seems too easy to be blocked like that. Maybe there should be a little more randomness in the path finding?

I agree that the game is a bit difficult in its current form.  Because it was made for a jam, we did not have too much time for balance testing unfortunately!  Originally you were going to have to choose between regaining oil or sanity in between levels with no pickups to be found on the floors.  Thankfully we decided against that!

Throwing the lamp was meant to be a high risk and high reward as its the only way to kill multiple enemies in one action.  Getting blocked by enemies is definitely a frustrating way to die.  The pathfinding was a bit of a rush job since our programmer had to write an A* algorithm from scratch which ended up being more trouble than we anticipated.

Thank you for playing and giving your feedback!

I think the issue with the pathfinding is that once you are adjacent to an enemy, it tracks you move for move. There is no way to get past it, and if it happens to be standing on your lantern, then you can neither recover the lantern, nor attack it. All you can do is move back and forth while it continues to block you.

Is the lamp supposed to have an AOE effect? I've not seen it kill anything other than the target square it lands on.

I can definitely see the light/sanity trade off, but the balance isn't quite right yet. You can't skip lighting torches, because loss of sanity just kills you outright, so you just have to live with the lack of oil.

I assume the blue ghost isn't supposed to be destroyable?

The lamp kills all enemies and lights all torches on its path after you throw it.  Originally the plan was to have an AOE tied to it but this went along with some other ideas we had to cut and didn't end up making it into the final product.

You gain more sanity than you lose oil when you light a torch.  I think the main issue is how fast you lose oil as you play.  When you hit zero sanity the blue ghost appears and begins pursuing you.  Its not a definite death sentence but you are forced to play much faster than you'd like to.

The blue ghost isn't killable but you can push him away with a lantern throw though you probably aren't getting it back at that point.

absolutely love the concept, but the execution needs a bit more work. I agree with all the points Netbug009 has mentioned and personally think the light runs out too fast, considering there are lots of enemies to kill. they literally corner you at some points and you have no choice but to use up the light to kill them. overall, an addicting game. I kept wanting to play despite the bugs. would love to see this be made better and will definitely check in every once in a while to see if improvements are made! keep it up ^ - ^

Thank you for your kind words!  This game was originally made for a game jam so its definitely far from being a complete project.  I am very proud of what we were able to make though!

I'm glad you had fun!  Thanks for playing!

With the way the game is laid out and a lack of a full-screen button, I can't see the entire game without scrolling up and down, and sometimes the "Submission to Game Jam" flag gets in the way. These elements made it too frustrating for me to really play long enough to get a good impression. Interesting concept of the sanity meter in a roguelike though.

Huh, weird.  I see what you mean when I reduce my window size how the banner overlaps the screen area.  I've enabled the full screen button but the game has no rescaling built in so it will go to the top right of your window and probably not take up the whole screen.  It should be good otherwise though and I'll look into getting it working properly in full screen.  Thanks for the heads up and thank you for playing! 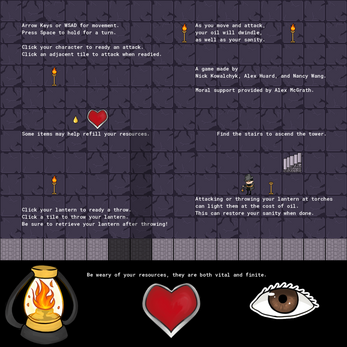 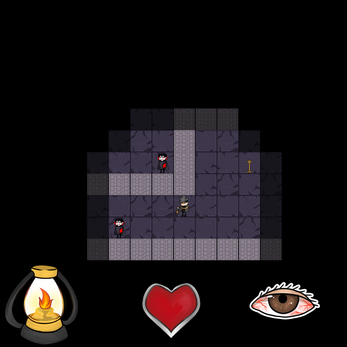 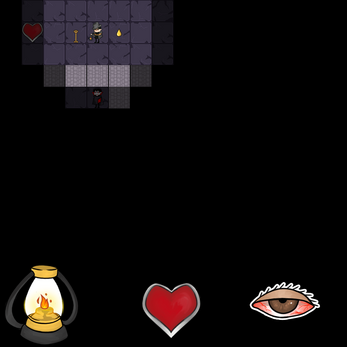 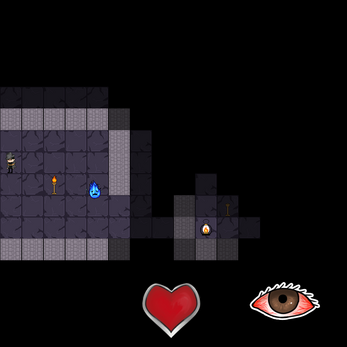